Animal Concern Advice Line has been sent video footage of two shooting incidents which took place on Islay in February/March 2018. The three short videos are of one incident and the longer video is of another. The geese are shot by “marksmen” employed by the Scottish Government through Scottish Natural Heritage (SNH).

The deliberate killing and scaring of geese is central to the SNH Islay Local Goose Management Scheme. The project costs nearly £1,000,000 a year and in the 2017/18 shooting season employed three full-time marksmen to kill 3,095 of the 3,321 geese to be officially killed. The other geese were shot by farmers and land owners who are also compensated from the public purse for damage caused by geese grazing on their land.

The October 2018 issue of British Wildlife Magazine published a paper titled “The Islay Barnacle Goose management strategy: a suggested way forward” by goose experts Dr. Steve Percival and Dr. Eric Bignal. This paper and the results of recent surveys that have just become available in the last few days make it imperative that the lethal aspect of the goose management programme be halted immediately. Barnacle Goose numbers have fallen dramatically. The November count having gone down from 48,400 to 30,400, a drop of 37% since the previous year. Breeding rates are at an exceptionally low level with only 3% of the flock being young birds, the lowest percentage in over 25 years. Scotland has a duty to care for these otherwise protected birds instead of killing them.

What drew our attention to this issue was the fact that the Scottish Government routinely uses the term “crippling” to refer to birds which are shot and injured rather than killed outright. SNH insists that no more than 10% of the birds suffer from crippling.

An article in the Scotland on Sunday newspaper of 18th November 2018 states: The marksmen insist if a bird is maimed, they go back and find it and put it out of its misery.“Any birds that are injured, we get them, simple as that. At the end of the day we have our own number to reach so it wouldn't be in our interest to leave injured and maimed birds lying around the island. One, it is unprofessional, and two, it's unnecessary suffering for an animal.”

Animal Concern Advice Line used Freedom of Information laws to obtain a copy of the Minute of the 27th March 2018 meeting of the Islay Local Goose Management Group. Responding to criticism received over the methods used by their marksmen it was recorded “ … . The Group agreed that the marksmen were appropriately trained…” .

That's all ok then. The marksmen are doing what they are paid and trained to do by SNH, no more than 10% of birds are “crippled” and the shooters make sure they track and kill the crippled birds.

If you look closely at the videos and stills we have received you just might see some flying pigs. SNH and the Scottish Government are either deliberately telling us porky pies about the Islay Local Goose Management Scheme or they are not fully aware of what is happening on the ground and in the skies of Islay.

Are SNH proud to have trained marksmen to fire a shot to get the birds into the air and then blast them repeatedly with semi-automatic shotguns to bring down as many birds as possible in the full knowledge that some will be badly injured but not killed? Are the marksmen trained to deliberately shoot at birds from such a long distance that a clean kill is impossible? Who trained the marksmen to wring/dislocate the necks of crippled birds? From what we see in the videos the marksmen are not very good at humanely finishing off injured birds.

The still photographs of geese found dead the day after the shooting incidents do not sit well with the statement made to Scotland on Sunday when a marksman said; “Any birds that are injured, we get them, simple as that.” Apparently not only were these birds left overnight to die slowly from their wounds, they were not collected to be measured, sampled, included in the kill total and disposed of properly. 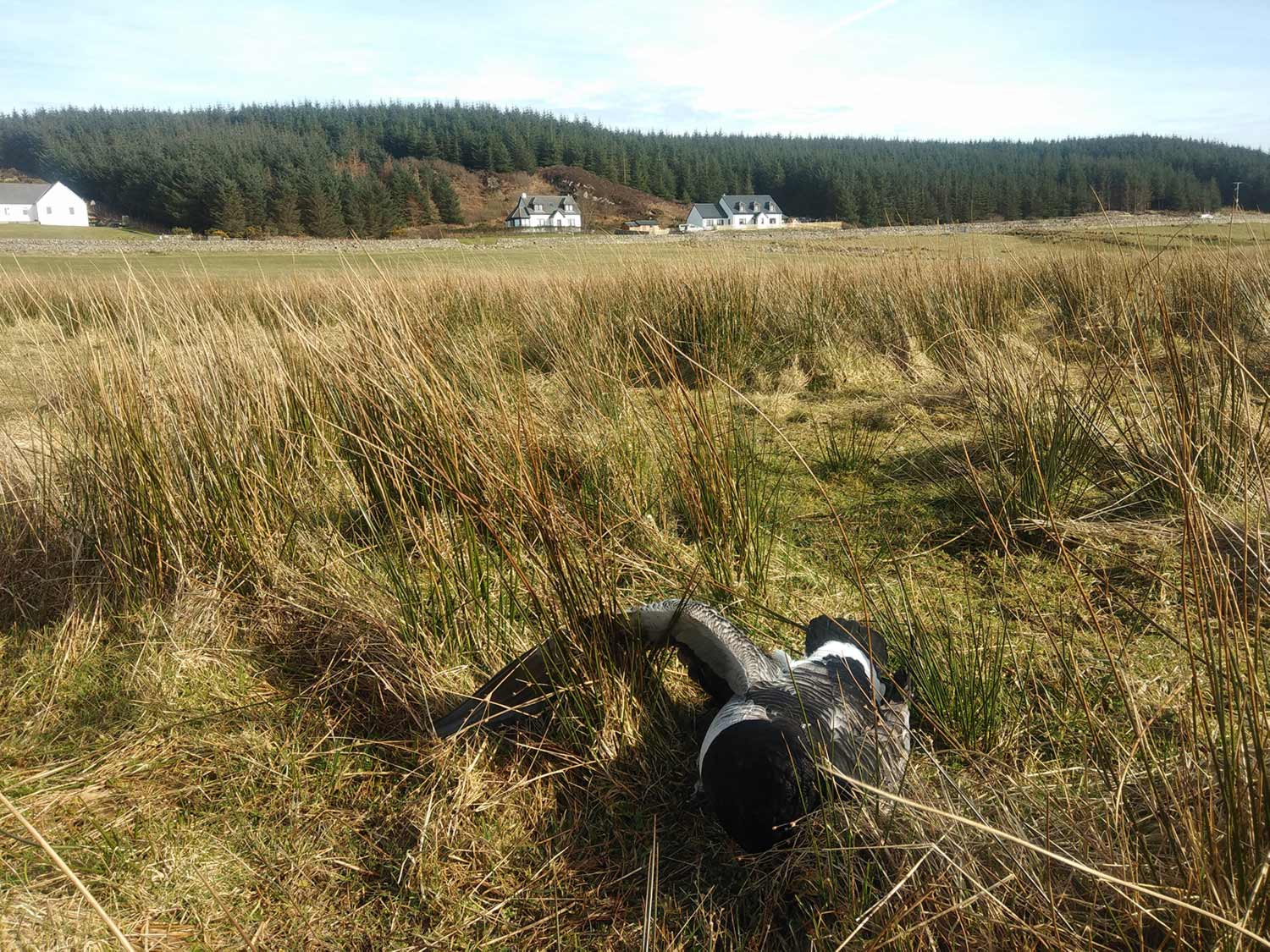 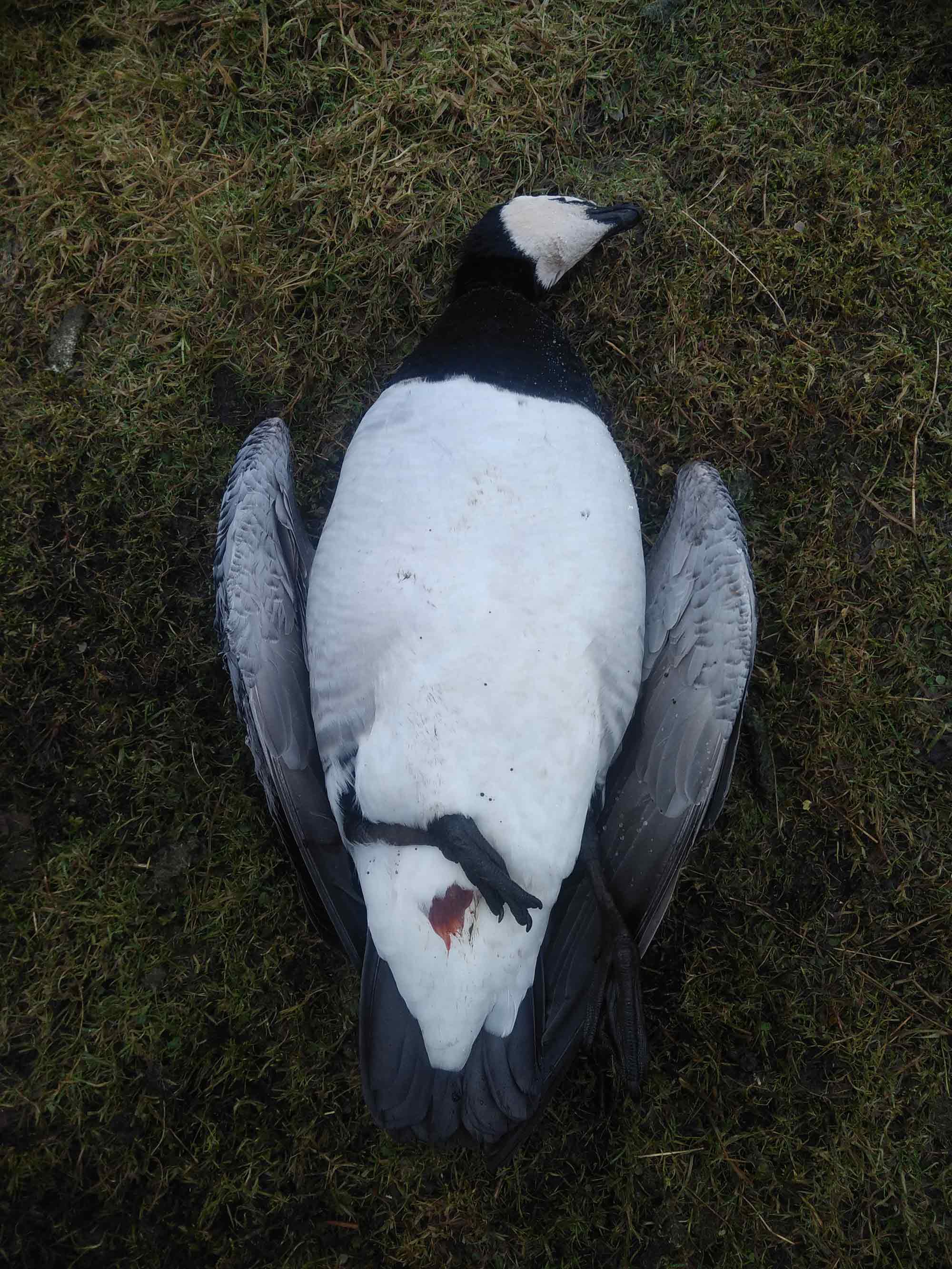 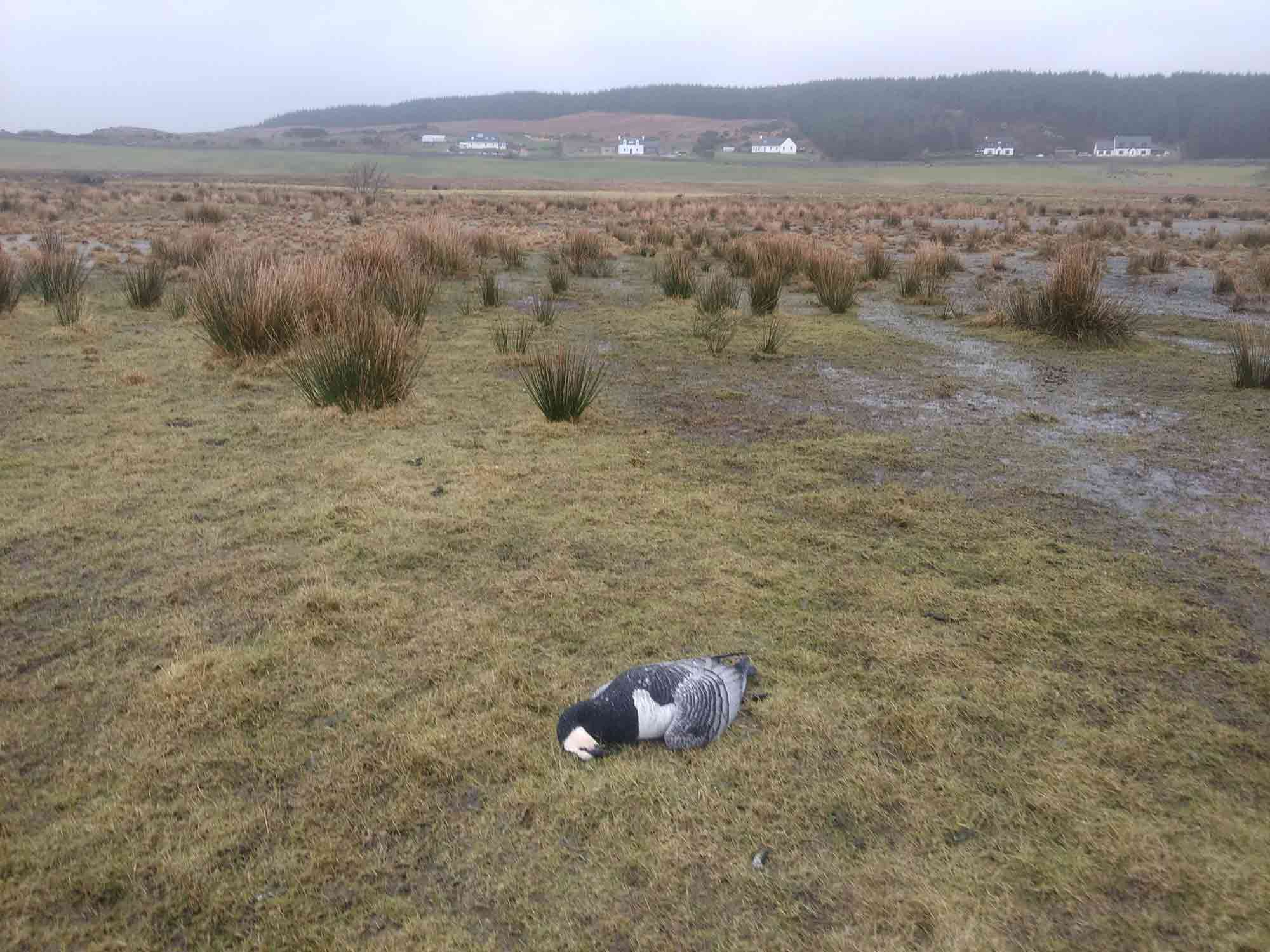 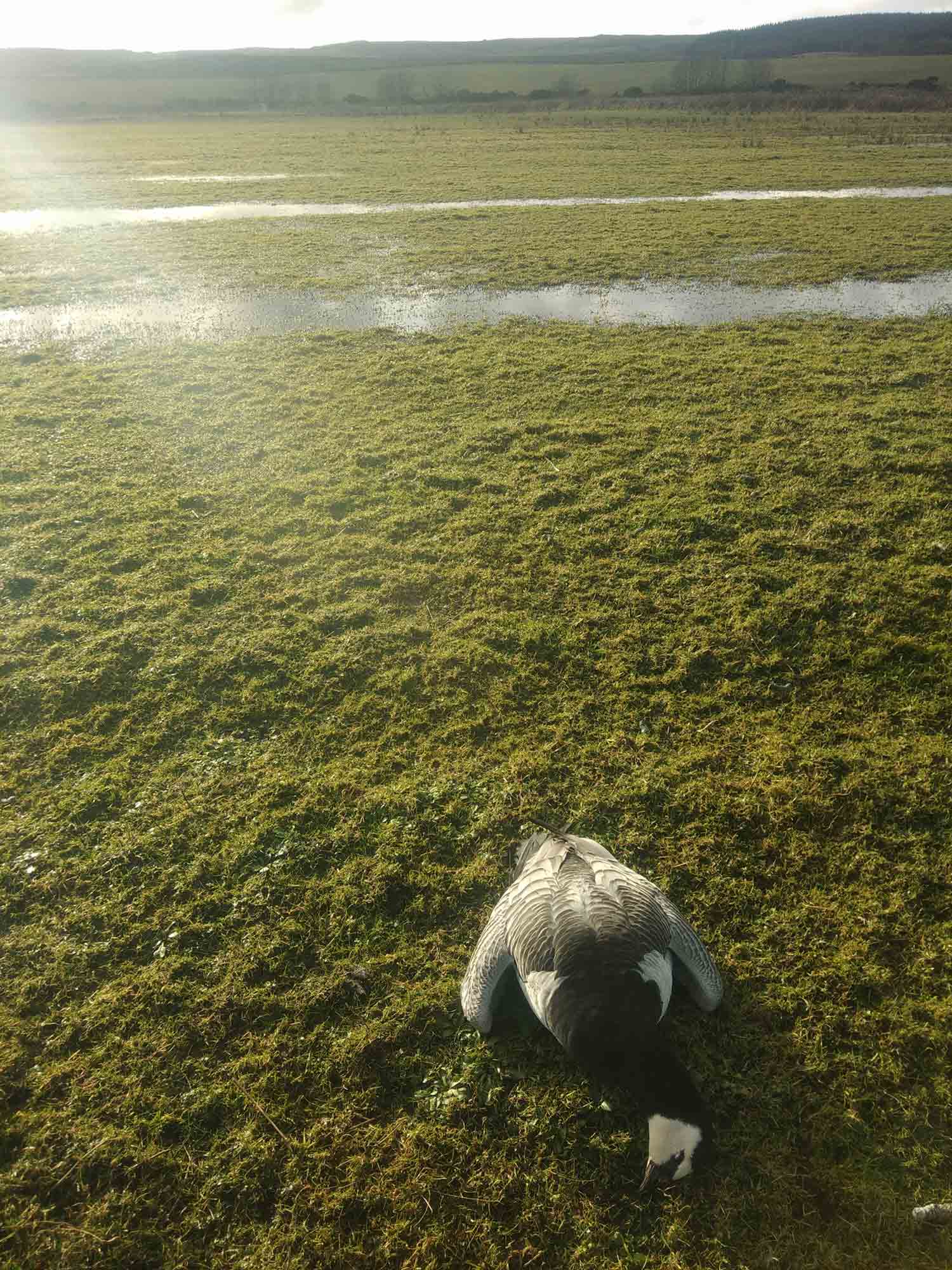 Having eventually succumbed to their crippling wounds these barnacle geese were found by a member of the public the day after they were shot. They, and others like them, would not have been included in the official figures for birds killed. They were not disposed of properly and left to rot where they died.

This brings us to the SNH assurance that only 10% of birds are “crippled”. Of course deliberately causing any animal to suffer this way is wrong but if SNH want to play the numbers game we can play that too. If you are the person who works for SNH or any other part of the Scottish Government and came up with the ludicrous 10% cripple quote I strongly suggest you take off your shoes and socks now because you're going to need your little flightless piggies to keep up with the numbers.

In Video 1 (1m 25 sec) we see a large flock of birds in a field beside the road. Two shooters arrive in their 4x4 and stop near a hole in the drystone dyke. One man immediately jumps out of the vehicle and gets 4 shots off in a second or two. Given the matter of seconds between arrival and shooting how did the shooters even attempt to follow the rules and ensure there were no white-fronted geese, curlew, lapwing or other birds amongst the Barnacle Geese?

At least six birds run into long grass and reeds before the shooter can get to them. Shooter runs towards the birds, grabbing and attempting to neck-wring wounded birds as he gets to them. Several of the birds still seem very much alive after he wrings their necks and he seems to miss one he shoots at from point blank range. As he deals with some of the most badly crippled birds others can be seen over a hundred metres away running into the next field. At least one of the injured birds manages to take off and fly out of the area. There's no indication that these crippled birds are killed.

In the above video (Video 4: 5m 31sec) Two shooters crouch behind a wall near to a flock of geese. They jump up and fire 10 shots in 4 seconds. Despite being very close to the flock around 14 of the circa 20 birds shot are still alive. I make that around 69% crippling rate rather than the official 10%.

It is fairly obvious that SNH protocol is to use rapid fire with small shot to deliberately cause a scattering effect to bring down more birds rather than cleanly kill one bird per shot. There's a lot of running around by the shooters trying to kill crippled birds but once again their neck wringing technique is not very effective. Many crippled birds run out of sight and it is not at all clear that all of these birds are dispatched.

As well as these two shooting incidents caught on video there are at least three eyewitnesses to other shoots who report that crippling rates were similar to those filmed.

In addition to the obvious suffering seen in the videos a number of birds will have been wounded but still able to fly away from the area. These birds may die later from their injuries or from lead poisoning. The number of these “flying wounded” is indicated by recent data from an ongoing study which show that more than 20% of live Barnacle Geese on Islay have lead shot in their tissues. 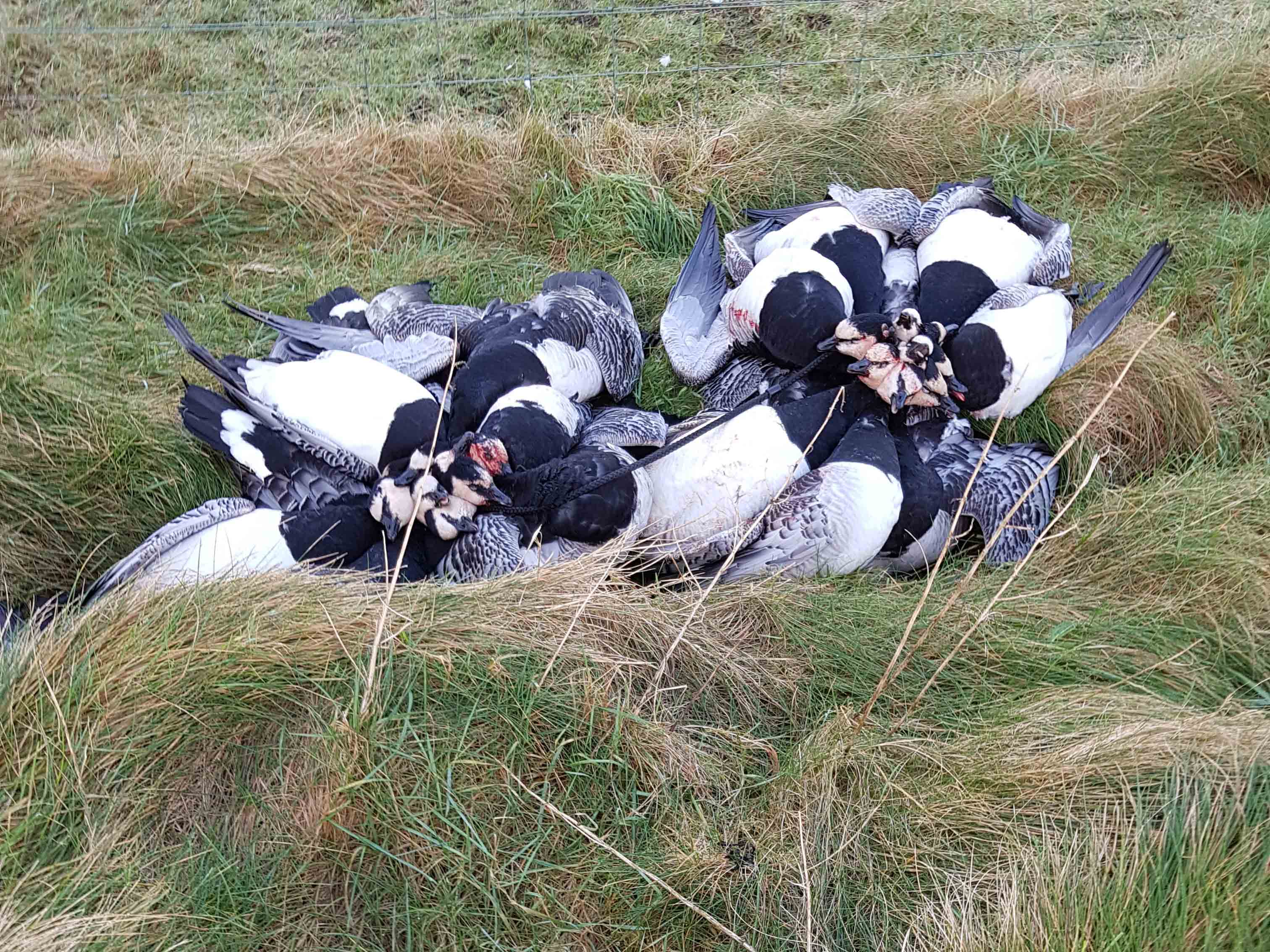 On the grounds that it is cruel, scientifically flawed and could be endangering the conservation status of the global population of Barnacle Geese, Animal Concern Advice Line asks the Scottish Government to immediately stop killing geese on Islay and conduct a full review of the Islay Local Goose Management Scheme. John F. Robins, ACAL 10/1/2019.